Five Reasons Why a Man-Cave Can Save Your Marriage

If you ask the average person why he or she decided to get married, most will tell you that apart from being in love, they craved the companionship. That's a good thing, because humans have been described as "social animals". This means that in order to thrive emotionally we need to be in regular contact with other humans. For most women, this comes naturally and easily. Women love to accompany each other to virtually everywhere from public restrooms to beauty salons. So it comes as no surprise that a lot of wives feel hurt when their husbands seems to want to be apart if only for a brief moment. 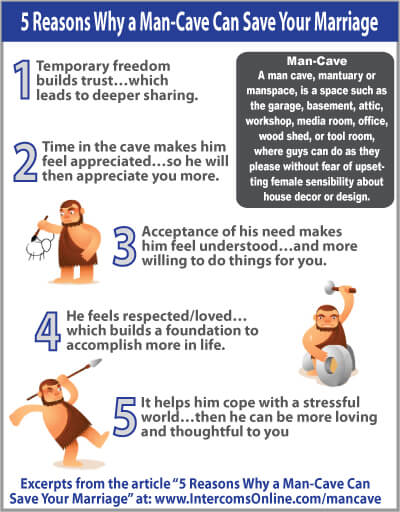 Just the thought of him wanting some alone time sends a lot of women immediately looking for an explanation: Is it me? Is he having an affair? Doesn't he love me anymore? Is it because I've gained a few pounds? And on and on they go torturing themselves, trying to come up with a reason why he needs to withdraw.

You see, for most women, when there's a problem the "normal" thing to do is to call up a friend and talk it out. Even if a woman says she's taking some time out to think, she might still end up chatting with friends or talking on the phone. On the other hand, for a lot of men a problem means that he needs to pull away and figure it out-- alone. A woman's alone time may consist of soaking in a tub of scented salts, curling up in bed with a good book, or getting her hair done. A man's alone time is frequently spent in front of the TV with snacks and drinks or in a shed with tools.

At a recent marriage seminar, the presenters spoke about a man's occasional need for solitude. One young wife angrily stated that she disagreed with the whole concept. "If he needs some alone time he can go lock himself in the bathroom", she declared angrily. Although it sounds like a joke, her response is typical of a lot of women because for them pulling away means that there's something wrong with the relationship and he's running away.

What very few women understand is that their husband's withdrawal is not because of them and it's not about "wanting to be alone" per se; it's about a man's need to relax, to think, to work stuff out on his own and in his own way. This is his sanctuary or "mantuary" as some may call it: the place where he's restored.

Understanding your man's need for this space can enrich your relationship because he feels safe, understood, appreciated, and respected. When a man feels all of that coming from his woman, he is empowered to love her like she needs to be loved. Let's explore the five reasons why a man cave can actually improve your relationship:

A man cave doesn't have to represent total separation between husband and wife. Some women wonder if it's acceptable to knock on the cave door or to call their men out for emergencies, phone calls, or simply when communication is necessary. Installing a wireless intercom system will solve this problem for you because it eliminates shouting or banging on a door, which can sometimes come off as mean or aggressive.

Allowing your husband to have his cave has many advantages. Always remember that men are wired differently than women and these differences need to be honored in order for your relationship to thrive.