Articles
OSHA's Environmental Health & Safety requirements can be extremely costly to implement, but there are ways to save thousands of dollars on at least parts of the requirements. If you are an employer who is required to implement an employee emergency evacuation system, also known as an employee alarm system, to satisfy one of OSHA's standards, this article will help you do that. 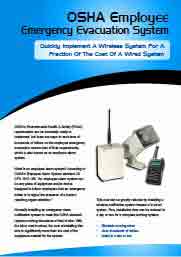 The purpose of OSHA's Emergency Evacuation Systems standard 29 CFR 1910.165 is to provide an early warning system for implementing emergency action and to give employees time to safely escape a building or area in the event of an emergency situation.

Below are some examples of instances that require an emergency evacuation system, including links to OSHA's website for more information. 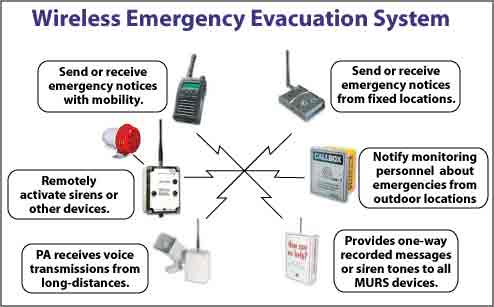 That is an emergency evacuation system? According to OSHA, "An employee alarm system can be any piece of equipment and/or device designed to inform employees that an emergency exists or to signal the presence of a hazard requiring urgent attention. National Fire Protection Association (NFPA) 72, National Fire Alarm Code, requires a fire alarm signal to be distinctive in sound from other signals and can not be used for any other purpose."

The OSHA Standard goes on to say that you can use audible alarms that "include bells, horns, sirens, voice announcement systems, and other devices that can be distinguished above and apart from the normal sound level within the workplace." They say the most effective means are voice signals or an interrupted steady sound (off and on sound).

One of OSHA's recommendations is a "Workplace Announcement System." Here's how they define that: "Speakers can be used to play a live or recorded voice message. They are often ideally suited for large workplaces where phased or guided evacuations are needed."

In businesses that have large buildings or cover a lot of ground, installing a wired emergency evacuation system can cost tens of thousands of dollars. What you will learn here is how to do it for a fraction of the normal cost. 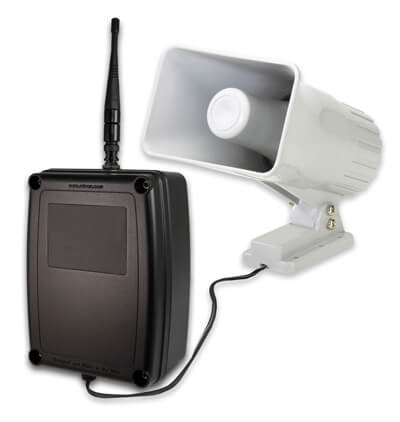 The heart of this system is a Wireless PA System. A wireless PA system consists of a wireless receiver box connected to a horn PA speaker via a cable, and then some sort of wireless transmitting device, which could be a two-way radio or base-station intercom.

The system has a range of up to a mile or more and the range can even be extended by adding an external antenna to either the Wireless PA, the transmitter, or both. If you have a wired PA system already, you can also get a Wireless PA System Interface device that will receive transmissions from radios and then broadcast those transmissions over your wired PA system.

There are several devices that can communicate with the Wireless PA system. The indoor or outdoor Customer Service Call Box is one of them. It can be used as a panic button that when pressed sends a recorded message to two-way radios, base-station intercoms, or to a wireless or wired public address system.

You can record whatever message you want, or you could simply record a siren sound that plays when the button is pressed. If you have multiple areas where you need a panic button, then you'll want to make sure you can distinguish between the recordings so you know where to send help.

There are other devices you can add to your system such as Wireless Call Boxes if you have locations outside that need to broadcast emergency messages from a fixed location. 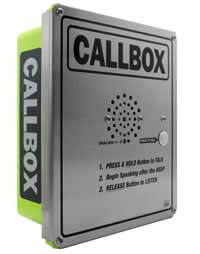 A wireless call box is essentially a two-way radio in a heavy duty water-resistant housing. When its button is pressed, the person pressing the button can talk to other hand-held radios, base station wireless intercoms, and even the Wireless PA system.

There are some situations where placing a phone call to notify an emergency response team is just not fast or reliable enough. With a wireless call box, a simple press of a button notifies everyone that needs to know. Probably the best way of using it would be to have it contact emergency personnel who then make pages over the employee alarm system.

Keeping your employees safe in any way you can should be a top priority of yours. Using all of these devices as an employee alarm system is one way to do that, while saving thousands of dollars over the cost of a wired system.

Also see this article and all the components that make up this system: Voice Evacuation System 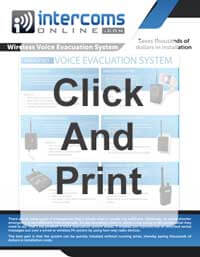