For decades now security system dealers, gate installers, and other companies have been installing intercom systems that use telephone lines for access control and voice communications. With the growth of the Internet and wireless phones, the days for installing analog telephone lines are numbered. Fortunately for you, this change is a revenue-producing opportunity.

According to analysis by telecom industry trade association US Telecom, traditional wire-line service dropped from 95 percent of U.S. households to 40 percent in 2011. The declining trend is continuing in 2012 as more people adopt cell phone and Voice over IP (VoIP) services.

Even telephone companies are trying to get rid of old landline technology. AT&T claims that traditional telephone lines are a "dying technology" and as the most lucrative customers leave it, the cost of subsidizing the remaining customers is becoming prohibitive.

The Federal Communications Commission (FCC) also recently held workshops to examine the transition from the public switched telephone network (PSTN) to new technologies. The Technical Advisory Council (TAC) to the FCC recommended that the FCC set a date for the end of the PSTN rather than let the service fade slowly into oblivion as it is doing now.

A "Wholesale Voice Buyer Survey" was recently done to better understand the disruptive factors and trends U.S. wholesale voice buyers think will most impact their businesses (survey sponsored by inetwork. Below are the three most disruptive factors impacting responder's businesses: 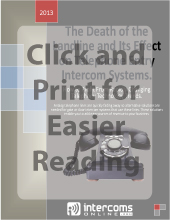 In the survey, you can see that 70 percent of respondents noted the death of "Plain Old Telephone Service" (POTS) as the third most disruptive factor, with providers of legacy phone services looking to gain efficiencies and offer end-users the enhanced features only available from IP-based platforms.

74 percent of respondents noted that the death of the office landline, the desk phone, will be the single most disruptive force in voice services, anticipating the continued penetration of mobile devices by business users as well.

Another key finding of the survey was that application programming interfaces (APIs) are becoming the preferred method for customers to access services. So instead of directly dialing a phone number users will be running an application on a Wi-Fi enabled smartphone or softphone, and that application will ultimately be used to place VoIP calls through a router and the Internet, but in the near term it could also be used access legacy voice communication networks.

Why are Landlines Dying?

As mentioned above the main factors for the decline of landlines are mobile phones and VoIP services. While the growth in the overall mobile phone market is expected to be low for 2012, one segment of the mobile phone market is growing rapidly. As such it will not only increase the reduction in use of landlines, but it also has the potential to greatly reduce the use of wire-provided broadband Internet in homes and businesses. This would then reduce the use of Internet-based VoIP services that are also playing a factor in landline decline. That mobile phone segment is smartphones.

A recent Nielsen survey showed that 55 percent of consumers who bought a new phone in the last three months got a smartphone over a more bare-bones feature phone, up from 34 percent a year ago.

According to research firm comScore, as of the end of May 2012, the ratio of consumer phone users in the US (aged more than 13) who use smartphones as their primary phone has reached 47%. So about half of mobile phone users have smartphones and the trend doesn't appear to be slowing down. In March 2012 Nielsen essentially concurs with that figure in when they claimed smartphones were in use by 50.4% of consumers in the U.S.

Smartphones are only one factor in the death of the landline. The other is VoIP. Right now many products that use telephone lines for communication are using VoIP services as a replacement when standard landlines are not available. However, the rapid growth in smartphone usage could soon start to have an impact on even those replacement VoIP services. If customers no longer have wired broadband Internet installed in their home or office, and they just use their smartphones and 4G cell phone service for Internet access, we could see a decline in non-wireless VoIP usage as well.

The July 2011 report, " Smartphone Adoption and Usage " by the Pew Internet Project found that 25 percent of Americans say they are now doing most of their Internet browsing on their phones instead of a computer. "While many of these individuals still have other sources of online access at home, roughly one third of these 'cell mostly' Internet users lack a high-speed home broadband connection," said Pew in its report.

That threat does not currently appear to be something to get too worried about for the short term, but it is something to watch closely. According to International Data Corporation (IDC),"By 2015, more U.S. Internet users will access the Internet through mobile devices than through PCs or other wireline devices. As smartphones begin to outsell simpler feature phones, and as media tablet sales explode, the number of mobile Internet users will grow by a compound annual growth rate (CAGR) of 16.6% between 2010 and 2015." The IDC believes that the impact of smartphone and, especially, media tablet adoption will be so great that the number of users accessing the Internet through PCs will first stagnate and then slowly decline."

The growth of broadband services appears to be leveling off. According to technology writer Om Malik, "There are more than 80 million broadband subscribers in the US, a sign that the market is getting saturated. It is not a surprise that the growth of new broadband subscribers has started to slow. So far this year, we have seen 200,000 fewer new additions." The big question is whether LTE service will begin to compete with this wireline broadband.

The plain old analog telephone line has been used as the communication link for telephone intercom systems since their inception. With these landlines going away quickly, if you haven't already run into clients who need an alternative, you soon will. If the client wants to keep their current telephone intercom and they have broadband Internet connectivity, then the solution is to add a VoIP service like Vonage (www.vonage.com), which requires a small monthly charge, or services like magicJack PLUS (www.magicjack.com), which has a small yearly charge. With any of these services you plug in an Ethernet cable from the client's Internet router into the phone adapter, and then plug the phone line from the current telephone intercom into the adapter as well. You can port the client's existing telephone number over to the new device, but there may be a charge for this with some companies like magicJack .

If the client doesn't have broadband Internet, or doesn't want to go the VoIP route, then you'll need a wireless solution. If the ability to call out to telephones isn't really a requirement, then a wireless intercom solution could be used. Long range wireless intercom callboxes can call either base station intercoms or handheld two way radios. Since they use wireless signals, no connection to a telephone network is required. 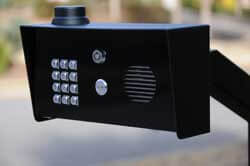 Whenever changes like this occur it's always an opportunity to increase profits either through new service calls or new hardware sales and the installation charges that go along with them. This is an opportunity that will only increase as the years progress and more and more analog lines disappear. 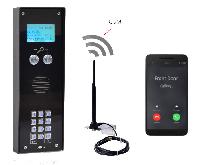 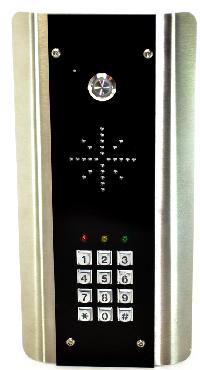 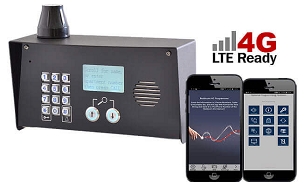 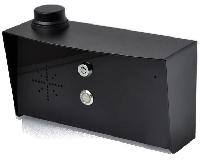