How to Choose a Wireless Emergency Warning System 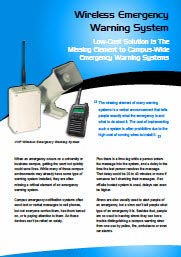 When an emergency occurs on a university or business campus, getting the word out quickly could save lives. While many of these campus environments may already have some type of warning system installed, they are often missing a critical element of an emergency warning system.

Campus emergency notification systems often send text or verbal messages to cell phones, but not everyone carries them, has them turned on, or is paying attention to them. So these devices can't be relied on solely.

Plus there is a time lag while a person enters the message into the system, and a delay in the time the last person receives the message. That delay could be 20 to 40 minutes or more if someone isn't checking their messages. If an off-site hosted system is used, delays can even be higher.

Sirens are also usually used to alert people of an emergency, but a siren can't tell people what type of an emergency it is. Besides that, people are so used to hearing sirens they can have trouble distinguishing a campus warning siren from one use by police, fire, ambulance or even car alarms.

The missing element of many warning systems is a verbal announcement that tells people exactly what the emergency is and what to do about it. The cost of implementing such a system is often prohibitive due to the high cost of running wires to install it.

This is where the use of a wireless pubic address (PA) system in conjunction with existing two-way radios can fit the need. Not only does a wireless PA system eliminate the need for expensive wiring, it also allows security personnel to make announcements no matter where they are. They can be at the scene of an emergency and give immediate updates. 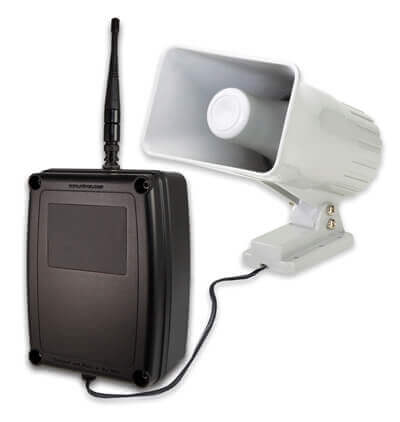 A wireless PA system consists of a long-range receiver unit with antenna that receives transmissions from a mobile or desktop two-way radio, amplifies them, and then sends them to attached PA horn speakers.

The wireless PA is available in UHF and VHF frequencies and can be programmed to work with existing campus two-way radios.

These units strategically placed across a campus enable security personnel to quickly broadcast clear emergency messages and live updates. These real time messages reduce the calls to emergency response personnel who are too busy to be handling dozen of calls from people looking for more information.

If broadcast pre-recorded messages are needed, the Wireless PA system can also be used in conjunction with a Voice Notification Wireless Monitor device, which is a wireless radio transmitter that reports changes in the status of switches connected to it. When a switch is closed, it transmits a user-recorded voice message to the PA system. It can be used for messages triggered by some device, or a button can be connected to it for manually activated pre-recorded messages.

So whether a natural or man made disaster occurs such as a tornado or terrorist act, an inexpensive add-on wireless PA system makes sense when an immediate emergency response is needed from a large number of people.